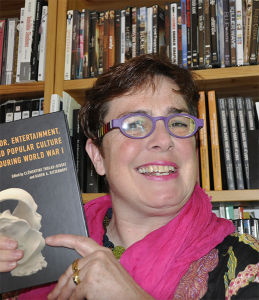 Karen A. Ritzenhoff is professor in the Department of Communication at Central Connecticut State University. She is also affiliated with the Women, Gender, and Sexuality Studies Program, as well as cinema studies and the Honors Program.

In 2015 she coedited three books. In December 2015 “Apocalypse in Film: Dystopias, Disasters and Other Visions about the End of the World” was released, coedited with Angela Krewani (Germany). Another volume for Rowman and Littlefield came out in July 2015, coedited with Catriona McAvoy (UK) about Selling Sex on Screen: From Weimar Cinema to Zombie Porn. Clémentine Tholas-Disset (France) and Ritzenhoff completed a coedited volume entitled Humor, Entertainment, and Popular Culture during World War I (Palgrave Macmillan, 2015). Ritzenhoff is also coeditor of Heroism and Gender in War Films (Scarecrow Press, 2014), with Jakub Kazecki (Bates College, US); Border Visions: Diaspora and Identity in Film(Scarecrow Press, 2013), with Jakub Kazecki and Cynthia J. Miller (Emerson College, US); Screening the Dark Side of Love: From Euro-Horror to American Cinema (2012), with Karen Randell (UK); and Sex and Sexuality in a Feminist World (2009), with Katherine Hermes. In 2011, she coedited a special media journal, Augenblick: Images of the Iraq War with Angela Krewani.